Through Foreign Eyes: A symbol is worth only what you invest in it.

Not much surprises me anymore, but here’s a string of words I never expected to see together in the same sentence: 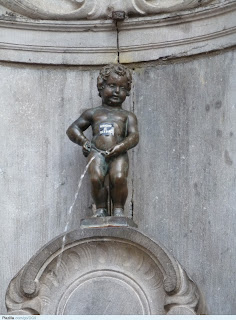 According to USA Today “the statue of a young boy urinating into a pool has been transformed into a symbol of defiance to those who carried out the terror attacks.”

You read that right. The Manneken Pis - which means exactly what you think it means - is that small bronze statue of the little boy peeing into a fountain basin. It stands a short walk from the Brussels Town Hall and it is probably Belgium’s best-known landmark, if only because a lot of young veterans brought back souvenir statuettes, as mementos after WWII.

A symbol is only worth what you put into it, and the Belgians have been creating origin stories for the Manneken Pis since the 17th Century – mostly connecting it to stories about the Belgians defeating invading armies against all odds, or the little boy named Julianske who saved Brussels by urinating on the fuse of a bomb planted against the city walls. 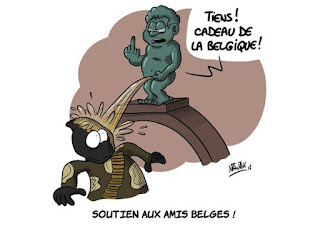 As comically weird as it looks to American eyes that statue was a symbol of Belgian resilience and resistance long before today’s attack.

During WWII Belgium had the misfortune of being a convenient bypass of the French defensive line. The Nazis overran neutral Belgium's purely defensive army in 16 days and occupied the place. After that both sides stomped and bombed the place for four more years.

You've heard of the Battle of the Bulge? I'm pretty sure your father or your grandfather might have mentioned it. 450,000 German troops, supported by massive armor and artillery support, launched a surprise attack against the overstretched and outnumbered Allies. The Bulge was where the brunt of the attack hit the American forces, who incurred the highest casualties of any operation of the war.

That was in Belgium’s heavily-forested Ardennes region. 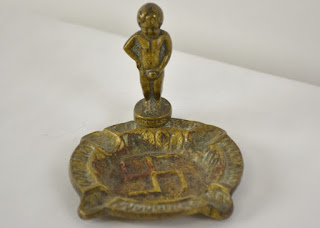 Which is why a lot of those GI souvenir statuettes looked like this:– the Manneken Pis doing his thing on a swastika. They also made them with a relief of Hitler's face on the receiving end.

A symbol is worth what you are willing to  emotionally invest in it. That's what makes it so powerful.

A Flag is not just a piece of cloth. A marriage license is not just "a piece of paper."  A death warrant, a hundred dollar bill, or a Picasso etching are also pieces of paper. They are worth only the meaning we invest in them.

Humans are a symbolic species. we invest our emotions and values in objects that gives them powerful meaning - no matter how strange it looks to foreign eyes.

Posted by Cultural Studies and Analysis at 5:20 PM No comments:

There are two sides to what we do at the think tank where I work. One is academic – we’re very involved in understanding culture – what it is, how it works, how it shapes our worldview, and how it drives our decisions and choices. This is the heavy and intricate stuff we write up for journals and present at conferences.

The other side is pragmatic. Rather than chase grants, we fund our research by working for the private sector. We know a lot about how people in groups make decisions. As in how they find value in products, services, themes, and ideas – and what consumers have to see and hear in order to recognize those values intuitively. We’ve advised everyone from theme parks, universities, retail chains, advertising agencies , marketing directors, and new product development to government agencies such as NASA.

Working the commercial sector also gives us another particular advantage. The social sciences get their data from surveys and controlled lab experiments. We have real-world data – masses of it – about what people actually DO, rather than what they say they do.

This is an important distinction because if neuroscience has proven anything over the past twenty years, it is that people can’t tell you what they want with any degree of accuracy – but know it when they see it with 100% accuracy. People can’t reliably respond to surveys because taking a survey or sitting in a lab occurs in a different context than when you make a real decision.

Participants can guess what they will do based on their memory of similar experiences, but they won’t really know until they are faced with the actual decision in context.
Even then, the buy decision is made in their subconscious. They won’t know what they want until their conscious mind gets the message. Only then does their conscious come into play, conjuring up a logical rationalization why they want it emotionally - and that reason may or may not have anything to do with why their subconscious selected it.

Many people seem to have a problem accepting these findings. Two thousand years of Western culture, philosophy, and just plain thinking about thinking—from the ancient Jewish and Greek philosophers to Christianity, the Enlightenment, psychoanalysis, existentialism, all the way up to to postmodernist thought—don’t just vanish because of something as trivial as inconvenient facts.

The philosopher René Descartes attempted to prove his existence as a thinking being by thinking, summed up as Cogito ergo sum—I think therefore I am.
Everything that makes us unique individuals exists only in our mind. What we see in the mirror every morning—our body—is just the physical support system for the mind. Who we are and what we “mean” only exists so long as our mind can generate and retain memory. That’s why the most fearful disease for seniors is not cancer, but Alzheimer’s. It slowly destroys every vestige of your memory of your sense of self, leaving only the physical shell.  The body is there, but the individual isn’t.

As Americans, we think of every individual as unique, but it is collectively as a species that we are truly unique. According to Dr. Yuval Noah Harari of the Hebrew University of Jerusalem, the unique thing about human beings—the key aspect that distinguishes us radically from other animals and allows us to create large complex social organizations—is that we can create, hold, and share beliefs about things that do not exist or cannot be empirically demonstrated.   In other words, to paraphrase Lewis Carroll’s White Queen, we can believe as many as six impossible things before breakfast.

We can imagine, and believe, logical impossibilities – concepts we cannot objectively prove: myths, legends, gods, dreams, hope, and religion. We can create belief in abstractions such as money—the only belief system with total acceptance worldwide—and credit (from the Latin credo – belief). We can create worlds that do not even exist yet, such as alternative visions of the future. We can create a shared mindset with others that transcends family, tribe, clan, or nation.

What truly demonstrates the uniqueness of humans as distinct from other primates, Harari maintains, is that you could never convince a monkey to give you a banana by promising him a limitless banana supply after his death, in monkey heaven.
Not only can we think impossible things, we can share them with others. In 1961 President John F. Kennedy announced the national goal of "landing a man on the moon and returning him safely to the earth" by the end of decade. Millions of people believed it was going to happen, including the scientists and engineers who later admitted they set to work with no reasonable idea of how it could be done. Because they believed – against all empirical evidence – that they could do it, all they had to do was figure out how.
Humans, like other primates, live in an objective reality, but we have layered another reality on top of that—what Harari calls a “fictional reality.” It’s the ability to conjure up alternate explanations and imaginary futures – ones unsupported by existing evidence -- that gives us emotions such as faith, hope, and curiosity, and outcomes like religion and science.

Not only can we imagine them, we can believe them to be true even when we can’t prove it.  These imagined futures sustain everything we do as we move through life: marriage, children, education, investing, innovation, and faith.

Combined with our other abilities to read and exchange emotions, intentions, and fictional realities among ourselves—to create a Transactional Reality— we alone can cooperate on a massive scale and across the eons to make their own future.
And that’s what makes us uniquely human and not just another species of clever ape.


Posted by Cultural Studies and Analysis at 7:33 AM 2 comments: