Time for My Annual Rant: Why I Hate St. Patrick’s Day

It's March 17th, which means it's time for my annual rant.

I wrote this back in the waning years of the last century, but it's truer than ever and back by popular demand.

Why I Hate Saint Patrick's Day 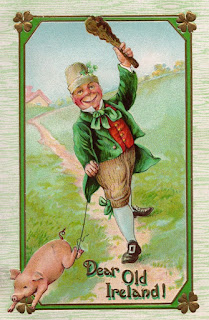 When I was a child, way back in the 1950s, choosing friends was easy. If they weren’t Irish, Catholic, and Democrats, they didn’t get past my grandmother.

I was her only grandson, so I was carried around on a pillow. I’m speaking metaphorically, of course, although with my grandmother you can never be sure. Anyway, “spoiled rotten” is the phrase that springs to mind, and I pretty much had my way on everything. But on one point she stood firm. She was Irish and I was Irish and I wasn’t to have any truck with “foreigners,” which was pretty much everybody whose last name wasn’t prefaced by a vowel.

My grandmother was not born in . She was from , and being a native-born American was a definite asset to her Irishness. It allowed her to hate the British with a fervor undimmed by the inconvenience of ever having met any.

She could recite the litany of English oppression from the moment the first iron-clad English knights smashed into the lightly-armed Irish warriors like panzers through the Salvation Army. She could call the roll of Irish Martyrs, but she could also quote Yeats and O’Casey, Swift and Synge, Shaw and Wilde. She knew all about the Wild Geese and why a fine French cognac has an Irish name.

She knew of the monastery at Clonmacnoise, the cultural center of the world in the Fifth Century that produced hauntingly beautiful illuminated manuscripts in an age when the Britons thought ink was for painting their arses blue. She never set foot in until my aunt gave her a gift of the Catholic version of a double-header—a two-week tour that included and the . She was in her 70s by then, and the day she arrived in someone set off a dynamite charge that blew the statue of Lord Nelson off his pillar on .

We always wondered about that.

You would assume from all this that I grew up knowing a lot about . In fact, I grew into a typical American teenager. In other words, I never listened to a word she said. All I knew about was a vague impression that it was supposed to be green.

With my usual stellar sense of timing, I arrived in on . This is comparable to visiting in 1968 because you heard that the Tet celebration was kind of colorful. Within a month my family picked up the paper to read “AMERICAN SHOT TWICE IN ULSTER.” This was typical yellow journalism; the bullets came nowhere near my ulster. I lived through the riots in Bogside and , the arrival of the British Army, the bombings, the rise of the Provisional IRA, and the first year of the guerilla war, which is still being fought by children who weren’t even born when I left.

It should have been horrible. It wasn’t. I planned to stay for two weeks. I stayed for two years.

There is something about that can’t be summed up in words. God knows, the Irish have tried. is green; a brilliant shade of emerald that exists nowhere else in the world, a green so alive it turns jet black when the clouds hide the sun. There’s something in the earth and the people that wants to make you put down roots and soak it up.

There is an instant, just at dawn, when everything turns soft and indistinct and you feel the slightest breeze would scatter the island like a mist. The dreary Victorian cities sparkle for a moment and the countryside seems to hold its breath. If you don’t believe in magic, you’ve never been to .

I didn’t want to leave, but the American Embassy gets touchy when you get involved in other people’s wars without asking their permission. Don’t bother asking, you won’t get it.

This is all my way of saying that I hate St. Patrick’s Day.

Americans are unusually conscious of their ethnic heritage. We celebrate Columbus Day as an Italian festival, the Germans hold a Von Steuben Day Parade, the Poles march for Kosciuszko and Copernicus, the Mexicans celebrate Cinco de Mayo. There isn’t an ethnic group in the country that doesn’t sponsor a folk festival celebrating the unique and entertaining qualities of their homeland. So what do Irish-Americans do to commemorate a heritage that stretches back to the mists of time?

This may come as a shock, but in , St. Patrick’s Day is a religious holiday. It is not customary to celebrate the patron saint by wearing a paper hat and drinking green beer until you throw up on your shoes. It is also considered a breach of etiquette to throw up on someone else’s shoes, particularly if that someone is standing in them at the time.

Face it folks, Jews don’t have a holiday on which they wear plastic big noses and stuff their pockets with play money and African-Americans don’t sponsor a tap dancing and watermelon festival. So why do the Irish take their worst stereotypes, set them to music, and dance to them? I don’t know what Irish-Americans think they are doing on St. Patrick’s Day, but it has nothing to do with .

If you absolutely feel the need to celebrate St. Patrick’s Day, here are a few helpful pointers.

It’s OK to wear a touch of emerald on March 17th. They don’t do it in but there’s no harm in showing a bit of ethnic pride. It isn’t mandatory, however, particularly if the only greens in your wardrobe are avocado, lime, Nile, moss, sage, pea, day-glo, or what Joyce described as “snot green.” Do not, under any circumstances, wear every green item you possess. People will not think you are Irish. They will think you are a teenage alien life form from the planet Zook whose mother allowed it to pick out its own clothes.

The gentleman’s name was St. Patrick, not St. Patty or St. Paddy. Patty is the name of a dental hygienist. Paddys are where you grow rice. St. Patrick was an Italian who was brought to by the Vikings. He brought Christianity to the island and drove out the snakes with his staff. The names of the staff, which did the actual work, are unknown. You should ignore that last bit. I put it in as a St. Patrick’s Day gift to my colleague, Susan McAninley, whose sense of humor runs in that direction.

People who wear buttons which read “Kiss Me, I’m Irish” inevitably aren’t. Don’t kiss them; you don’t know where they’ve been.

“Toora, loora, loora” is not an Irish lullaby. It’s the sound of Bing Crosby clearing his throat. Likewise, “Who put the overalls in Mrs. Murphy’s chowder?” is not an Irish song. True Irish music is uplifting, exciting, poignant, and melancholy, very often in the same song. Don’t try to sing along. Shut up and listen.

“Faith and begorrah” is not an Irish expression. It may be the name of an Anglo-Irish law firm.

Don’t wear a trenchcoat and hint darkly that you are in the IRA. The quiet little man sitting in the corner—the one with the cloth cap, bright birdlike eyes, and hands gnarled by arthritis he picked up in a British prison camp may take offense. You don’t want to piss him off. Trust me on this.

If you feel a sudden suicidal urge to tell an Irish joke, you may escape with only flesh wounds if you refrain from telling it in a terrible Barry Fitzgerald accent. There are many regional accents in , and none of them sound like Barry Fitzgerald. The man was an actor. It was his business to exaggerate for effect. All Irishmen do not sound like Fitzgerald any more that all people from sound like Vincent Price.